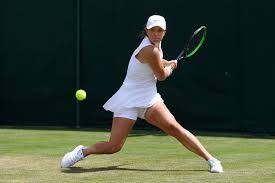 Earlier, Iga Swiatek was the first to reach the fourth round on Friday.

Swiatek saved all three break points she faced while converting five of the nine break points, she had. This is the best result at the Championships for the Pole, who’s making her only second appearance in the main draw here.

She will play either 21st seed Ons Jabeur or 11th seed and 2017 champion, Garbine Muguruza for a place in the quarter-finals. Karolina Pliskova won the Czech derby against Tereza Martincova. The eighth seed came through to the fourth round 6-3, 6-3 after an hour and 38 minutes of play.

For a place in the last eight, Pliskova will take on Russian wildcard Liudmila Samsonova. Samsonova, in her Wimbledon debut, continued her fine form on grass this time ousting Sloane Stephens in the third round. The 22-year-old won 6-2, 2-6, 6-4 in two hours against the American.

Serving for the match in the 10th game of the decider, Samsonova came under slight pressure and wasn’t able to make good of her first two match points. However, she brought up a third match point with an ace and finally made good of it after Stephens’ struck an error off her forehand.

Aryna Sabalenka reached the fourth round at Wimbledon with a dominant 6-0, 6-3 win over Colombian Maria Camila Osorio Serrano. The second seed needed just an hour and 15 minutes to take victory against the qualifier. Sabalenka hit 22 winners to Osorio Serrano’s nine and had 31 unforced errors to the latter’s 17.

She also converted six break points and saved eight of the 10 break points she faced. This is the first time in her career that the Belarusian has reached the second week at Wimbledon. In the pre-quarter-finals, Sabalenka will play Elena Rybakina.

The 18th seed from Kazakhstan got past Shelby Rogers 6-1, 6-4 in just 66 minutes in their third-round match.