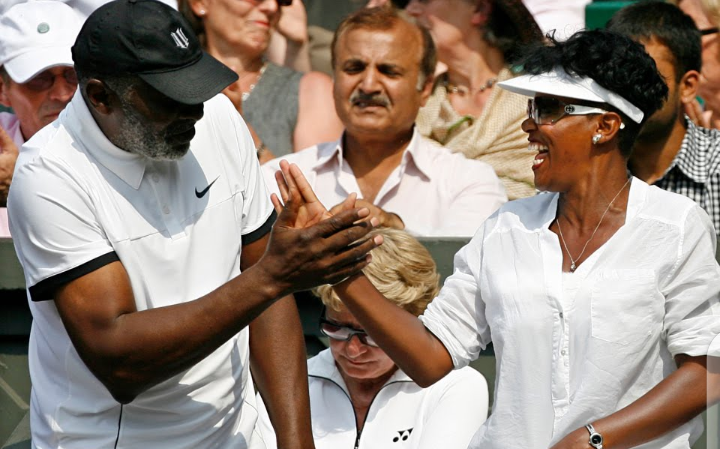 Richard Williams, 79, claims estranged spouse Lakeisha forged his signature to transfer their West Palm Beach property into her name, which she later admitted, according to court documents.

Williams’ legal team have been keen to prove that he was ‘incapacitated’ at the time of the mortgage transfer and wasn’t capable of agreeing to it.

The news comes as Serena was left in tears on Monday after she was forced to quit Wimbledon after slipping in her first-round match.

Her left ankle gave way as she tried to hit a return in just the fifth game against Belarusian opponent Aliaksandra Sasnovich.

In court filings, it was revealed that her former tennis coach father has suffered two strokes and his doctor said he has dementia and irreparable brain damage.

He is claiming his younger spouse, 47, took out a $152,000 mortgage from ‘hard lender’ David Simon in February 2017 after imitating his handwriting.

She then allegedly borrowed a further $127,000 to set up a failed trucking business and only ever paid back approximately $25,000.

Now, Judge Donald Hafele has ruled in Simon’s favor and the couple are jointly liable to pay his loan and interest, plus attorney fees, which totals $513,213.67.

A foreclosure auction for the property was set for June 28, an order which Williams agreed to.

Simon was forced to ask the court to gain entry into the property, over fears it had fallen into disrepair, after Lakeisha refused access.

She then filed a handwritten motion against the foreclosure judgement, claiming she never received notice, after her attorneys, Wolfe Law, withdrew their services due to “irreconcilable differences”.

In a last ditch attempt to keep the home, Lakeisha filed for Chapter 13 bankruptcy on June 18, which has put the sale on hold.

Lakers Coach Frank Vogel in Serious Trouble Days After the…..

Maria Sharapova finally give update on her wedding date by….