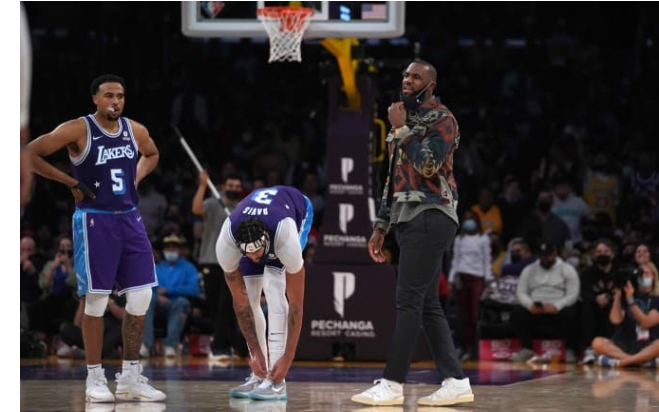 If you know anything about the NBA’s long history, this image of a griping LeBron James tells you all you need to know about why the NBA would technically be totally justified in suspending him.

Here he is stepping out onto the court, while not in the game (and indeed, while not dressed for the game as he sits out his seventh straight with an abdominal strain), to contest an unjust call.

In this case, he is complaining about referee Scott Wall assessing a second technical foul against All-Star Lakers center.

Anthony Davis, ejecting AD from the game and effectively catapulting any possible chance the. Lakers have to mount an improbable comeback against the Chicago Bulls.

LA would go on to lose 121-103 and fall to an 8-7 record on the young season. Davis was complaining about play being resumed while he was still tying his shoe on the sideline. Which Wall somehow deemed an infraction worthy of an ejection.

In a move that shaped the fate of the 2007 Phoenix Suns, the NBA famously once made sure to enforce its dictum that players not active on the court are not permitted to leave the area of their bench.

The league, then led by commissioner David Stern, suspended forwards Amare Stoudemire and. Boris Diaw for one crucial fifth game in their playoff series against the San Antonio Spurs.

The Spurs, of course, would go on to win the series, eventually advance to the NBA Finals, and would claim their fourth NBA title.

The stakes right now are relatively minor. James certainly didn’t do anything less than what Diaw or Stoudemire did.

But because he’s LeBron James, and because commissioner Adam Silver may be a bit more lax when it comes to enforcing these somewhat arcane policies, this writer doubts James will be suspended. Maybe there will be a fine?

At home with Leylah Annie Fernandez reflects on surge